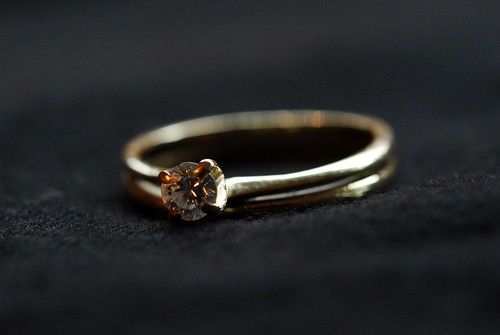 For the 83rd day of my 365 Project, I decided to do something to commemorate the year 1983, which was the year that my husband and I were married.

At first glance, this looks like one ring. And these days, technically it is. But it was made from two rings. The first was my diamond engagement ring. It looks reasonably large in this picture, but it is actually quite small – the diamond is only about a quarter of a carat in size. However, when we became engaged, it was all my then finance could afford – he literally emptied his checking account in order to purchase it. And even though it is small, it’s a good quality stone and is very pretty.

To go along with the engagement ring, we bought a thin gold band to be my wedding ring. After we were married, we had the two rings soldered together as one.

As the years went by and I gained weight, the ring began to look very small on my chubby finger. So for our 25th anniversary my hubby bought me another ring (which will surely be a subject for this project on a different day). The irony is that I joined Weight Watchers shortly after that time,and had to have the 25th anniversary ring resized twice to make it smaller. But those are the kinds of ironies in life that one just has to shrug off.

I do love my original engagement and wedding rings, though. They are very special to me, and I will still wear them occasionally on my right hand as a reminder of the time that we were first married.

I used my new macro lens to take this picture, It was hard getting a shot that focused on both the stone and the design of the ring, but I think that this one ultimately did a decent job of capturing that. I then decided to try some shots with other lenses, which weren’t able to focus nearly this close, which demonstrated to me just how much I’m going to enjoy having a macro lens for these kinds of shots. Over time I’ll work on getting more adept at using it properly, but I love being able to get this close to a subject.

Karokko – Fes, In the street of the boiler smithy, 6-41– Schmuck hochzeit

This was created by stephaniegibson.etsy.com for the Beads4You Winter Challenge. In the challenge, crafters from ...